Who am I and why am I doing this rewatch now?

I'm Sal Niner and I've been a fan of author Elmore Leonard for about 15 years now.  I was introduced to Leonard's writing back during my university undergraduate years.  I was doing an academic comparative analysis of his novel Out of Sight with the 1998 movie of the same title, for a course in Fiction and Film.  Since then, the story's protagonist, Karen Sisco, has been one of my favorite Leonard characters; also having followed her progression in the 2003 television series that has her as the title character.

I found out about Justified just this year at the beginning of its fifth season, when a search on the Karen character led me to this series (I wont spoil with details here and will save it for when the rewatch gets underway, but she makes an appearance in an episode early on in season three).  The first thing I thought, upon discovering the show, was how much I was reminded of Leonard's style, that familiar wit and humor he incorporates into his stories and characters (he's the object of much study by the series' creative team and that study has translated well into the show); therefore, being instantly taken back to the days at the university when I discovered these wonderful qualities for the first time in Leonard's work.  The second thing I thought:  why, oh why, OH WHY, hadn't I discovered Justified earlier?  Really, how much of a rock was I under??  I couldn't believe it:  me, a Leonard fan, just NOW coming into a show I absolutely without a doubt knew I would have loved had I discovered it from its premiere episode.  Don't ask me how I went this long because I've been trying to figure that out and I STILL don't know... Anyway, the point here is that I did discover Justified and what a fantastic journey it has been.

As season five was getting underway, I knew I had some catching up to do.  I made it my mission to watch, at the time, all 52 episodes before starting with the season 5 premiere.  Since this year's premiere, I haven't missed a single episode; and thus can safely say I've watched the entire series as it currently stands, at least once.  Which brings me to this rewatch...

I can also safely say that I love television and quite a number of shows over the years have become favorites.  However, it's been years, yes, YEARS, since a television show has not only instantly compelled me to talk about it, but has actually made me say a lot; Justified is that show.  In short, it is one of the most intelligently crafted serial stories in which most, if not all, of the characters immediately draw you in, that I have come across.  To me, the show is like a novel read in the visual sense, on-screen; each of its pages is a scene.  And as it has gone from scene to scene, it's become quite the page-turner that I have not been able to put down in 5+ seasons.  Yes, we know it is based on the short story by Leonard titled "Fire in the Hole"; but this fact has nothing to do with my comparison of the show to a literal book.  The series does read like a novel, regardless.

We all know Justified's production crew has announced that next season, its sixth, will be the last one.  The series just concluded its fifth season close to one month ago now, and as of yet no date has been set for the season six premiere.  However, based on the premiere dates of these last two seasons, I'm making an educated guess and say that the sixth season might premiere sometime around Tuesday, January 6, 2015; which gives us enough time to do a complete and organized rewatch of the entire, currently-existing 65-episode series.

My goal with the rewatch, therefore, is to start at the first season and finish with the fifth season so that we are immediately led into the sixth season without much of a break in-between.  I like to think of this rewatch as a celebration of this great show, as we prepare to wave goodbye to any new Justified (sad as the latter may be).  The rewatch will serve as a tribute not only to the story and characters themselves, but also to the actors, actresses, writers, producers, and other creative team that have worked to bring an immensely successful adaptation of Leonard's work to the small screen for all of us to enjoy.

So here I'll be on this calendar, doing rewatch reviews of each and every episode in seasons one through five, almost every Saturday and Sunday for the next 7+ months.

For each of the episode reviews, I'll be including:

- My pre-thoughts before watching the episode based on what I can remember.

- A basic introduction after watching the episode.

- A plot outline of the episode.

- Character performances worth noting, whether it's from the main cast or the supporting cast.

- The villain or villains of the episode and how well they did, or didn't do.

- Final thoughts and general reflections that relate to either the episode overall or to certain aspects of the episode.

Rewatch dates are subject to change without notice, so please keep checking back to this calendar regularly!

In the meantime, enjoy this meme.  I sure do like a Deputy U.S. Marshal who isn't all that complicated. ;-) 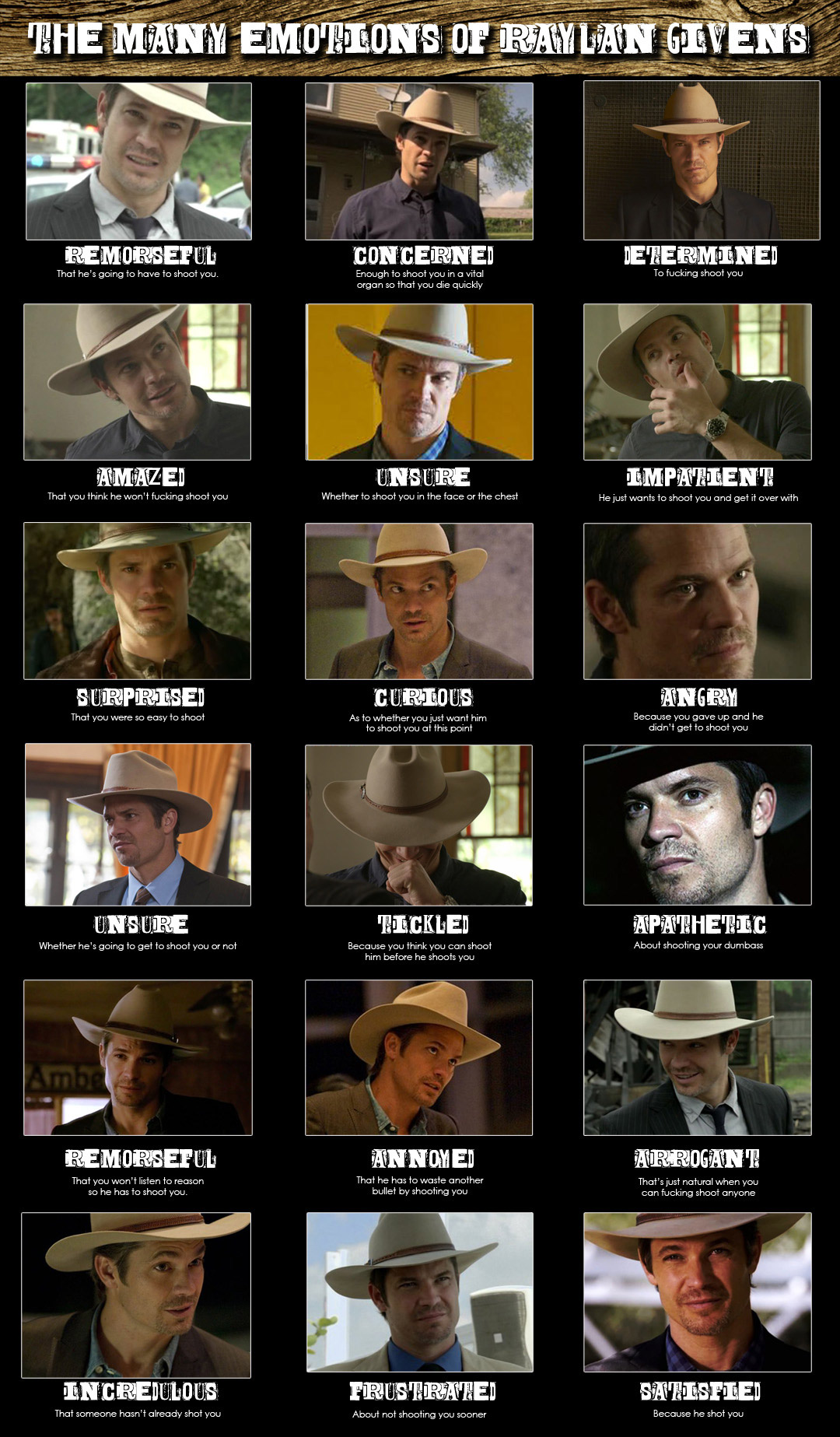 In the future, I will do a separate rewatch of season six.  When that will be, I'm not sure; but when it comes into being, I'll announce it on this calendar ahead of time.

Copyright 2010-2014 by PROPERTY OF CDSAL99 COLLECTIBLES & MEMORABILIA. Please DO NOT copy content, words or images, from this site. The items described are ones I have obtained. The descriptions, words and images, are my own; except where otherwise stated.